CEMDA has started a fundraising campaign with the aim of helping many of Mexico’s communities who face political agendas and non-sustainable projects that put their territory as well as their natural patrimony and their human rights at risk. This Christmas, join the environmental defenders and help us make environmental justice to those who need it the most.

We require your contribution in order for us to keep strengthening the environmental defenders’ capabilities while also being able to provide legal help. 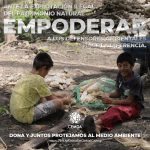 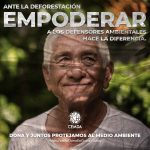 Now more than ever, the planet needs allies who can protect its waters, air, territory, and the species which inhabit it. With your contribution we will be able to move towards a Mexico where all its people can live in balance with nature.

Make a donation so that we can keep providing legal assistance to 10 communities in Mexico in addition to strengthening their capabilities in order for them to have the legal tools to protect their land, their natural patrimony, and their human rights.

Alongside the Inter-American Association for the Defense of the Environment (AIDA) we presented a legal writing (Amicus Curiae) to the Mexican Supreme Court of Justice with arguments of international environmental law, human rights, and climate justice in order to defend the Flora and Fauna Protection Area Yum Balam –where the island of Holbox is located-, in the Mexican state of Quintan Roo, from the pretensions of Lázaro Cárdenas’ municipal government of opening the area to non-sustainable touristic projects.

The municipal authority presented the Supreme Court with a Constitutional Controversy against the decree of creation and the Natural Area Management Program to invalidate these arguments and, according to a public statement, to give free rein to urbanization and tourism development. This pretense violates public interest given that the Yum Balam ecosystems could be severely degraded by massive tourism projects, bay dredging, desalination, or water treatment plants; deforestation, and the environmental print of thousands of visitors.

“Giving free rein to the municipality’s claim would be a regressive decision, one that goes against collective interest and that is a direct violation of the human right to a healthy environment,” stated Xavier Martínez, CEMDA’s Operational Director. “Allowing mass tourism projects in Yum Balam would imply privileging the interest of some private and/or ejidal owners at the expense of the value of a healthy environment and the rights of future generations.”

With the help of several citizen groups, civil society organizations, as well as representatives of indigenous people we have urged the Commission of Hydraulic Resources, Drinking Water, and Sanitation of the Chamber of Deputies to reject the Mata-Flores law due to the fact that it violates the constitutional decree of guaranteeing the human right to water while also threatening human rights related with the sustainable management of said resource.

We demand that legislators comply with the agreements adopted by the Hydraulic Resources Commission last August, and honor what was signed in the 35 forums held with citizens since 2019. This becomes even more relevant given that the Senate of the Republic has recently ratified the Escazú Agreement in which citizen participation regarding environmental affairs is deemed fundamental for the fulfillment of human rights and environmental justice.

In order to fall in with the constitutional decree of article 4 to guarantee the human right to water, it is necessary to have a General Water Law whose content, in addition to establishing the system of competencies to make this right a reality, must include the regulation that addresses the management, administration, protection mechanisms, inspection, and surveillance of water resources.

In the context of the environmental crisis that currently affects the most vulnerable communities, it is of pressing importance to count with a legal government that watches over people, populations, and ecosystems while guaranteeing a sustainable use of a resource as important as water.

On November 20, a letter sent to the government of Mexico by six special rapporteurs for human rights of the United Nations (UN) was made public. In it are reports of a series of alleged violations against human rights committed against people who live in the region where Mayan Train is bound to pass. The letter also poses specific questions to the Mexican State regarding the matter.

In the letter, the rapporteurs stress that “Without implying, in advance, a conclusion on the facts mentioned in the previous sections, we would like to point out our serious concern about the possible consequences of the so-called Maya Train Development Project on the indigenous communities’ territorial rights, their right not to be evicted, and their right to health, particularly in the case of states like Chiapas, Tabasco, Campeche, Yucatán, and Quintana Roo. We are also concerned about the information which indicates that the environmental impact study has been inadequate. This, in turn, entails risks of environmental damage from the activities of the Tren Maya Development Project caused by pollution and negative impacts on biodiversity and water. »

In this regard, the International Service for Human Rights, the Regional and Popular Council of Xpujil, the Mexican Center for Environmental Law (CEMDA) and the Mexican Commission for the Protection and Defense of Human Rights (CMDPDH) call upon the government of President Andrés Manuel López Obrador to comply with the measures requested by the UN rapporteurs and, above all, to respect his obligations under international conventions and human rights standards indicated therein. The most relevant and urgent things are that the construction works of the Mayan Train be suspended until a comprehensive and independent environmental and social impact assessment is carried out, that the consent of the representative structures identified by the affected communities themselves is obtained, and that all international standards in the matter are followed through.