Indigenous, peasant, urban, and coastal communities in the states of Chiapas, Campeche, Yucatan, and Quintana Roo, and organizations for the Yucatan Peninsula, announced that the Federal Judiciary has denied them effective access to justice in lawsuits they have brought against the Tren Maya project.

In a press conference, representatives of the NGOs Indignación, A.C.; Kanan Derechos Humanos, A.C.; Centro Mexicano de Derecho Ambiental, A.C. (CEMDA); and Consejo Regional Indígena y Popular Ixpujil (Cripx) and attorney and activist Kalycho Escoffié – who have assisted the plaintiffs in their legal efforts against the Tren Maya project – denounced what they described as legal delay tactics, violations of suspensions, and lack of punitive action against the responsible authorities, all of which in turn constitute human rights violations.

Since January 2020, communities for the Yucatan Peninsula, collectives, and civil society organizations have filed lawsuits against the Tren Maya development project, in which they claim violations of their human and environmental rights; the right to counsel and consent of indigenous peoples; and the rights to housing, healthcare, and public information, among others.

However, 15 months after first filing their lawsuits, some constitutional appeals (amparos) have not been admitted, as courts have referred the matter for action from state to state. One such action went from the courts of Mexico City to those of Campeche, and in Campeche parts were referred to Quintana Roo and Yucatan, with courts arguing that they could not take up the matter and passing it on to another jurisdiction.

When the competent court was finally determined, the Federal Judiciary Board, at the request of Nacional Financiera and without notifying the plaintiffs of the appeals, decided that all matters related to the Tren Maya project would be heard before the First District Court in Yucatan; since then, more than a year after they were first filed, we are still waiting for all the claims to reach that court, so the action can be admitted in its totality, creating a situation of denial of justice.

Also, expert testimony, motions for pretrial measures, and amendments to the complaint have been entered, on which the First District Court has yet to issue any ruling. The situation leaves many communities, peoples, and collectives who consider, with solid arguments, that the Tren Maya Project is contrary to the human rights without the means of exercising their right of access to justice and makes evident that the Federal Judiciary is self-limiting in its actions in violation of the standard set by the Escazú Agreement.

On the other hand, flyovers were made on sections of the Tren Maya Project, especially in various municipalities in Yucatan, Campeche, and Quintana Roo, observing illegal activities including removal of forest vegetation and opening of roads and mines for petrous materials, among others.

With the photographic record from the flyovers, the images obtained were compared with satellite images from a year before, showing signs of changing usage patterns on forest lands over some 356 acres of Mayan Jungle. Similarly, requests for information were filed, to which the authorities themselves affirmed – in official replies – that the areas in question “lack permits for changes in land use on forest lands linked to the Tren Maya project.”

Also, the flyovers confirmed that the National Fund for the Promotion of Tourism (Spanish acronym Fonatur) continues working along the project’s entire route, with activities that go beyond rehabilitation of existing works, which constitutes a violation of the suspensions that the District Courts and Collegiate Courts have granted in favor of the communities, collectives, and organizations, forcing the authorities to abstain from undertaking new works in relation to the Tren Maya project.

Finally, it bears noting that, although the project’s route has been changed in cities like Campeche and Merida, to avoid displacing residents, in Mayan communities the process of forced displacement continues, and residents who have filed amparos have faced pressure to relinquish their land with the promise that they will be given new homes, in most cases with no guarantee or proper documentation to provide legal certainty. Where are the environmental impact authorizations for the routing changes?

We demand that the Judiciary guarantee respect for our human rights and act promptly and diligently, because the different defense actions intiated in the Yucatan Peninsula have been beset by procedural delays, violation of suspensions, and lack of punitive measures against the responsible authorities. 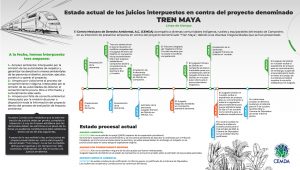