We finished this complicated year, as always, working for the planet. We wish 2021 to be a year filled with peace and health. A year in which we can continue to work on improving the environment and one where we can soon embrace again. We tell you about some activities that we carried out during the last month of 2020.

Mexico with no ambition to address the climate crisis

On December 12th, the fifth anniversary of the Paris Agreement, derived from the United Nations Framework Convention on Climate Change (UNFCCC) was celebrated; this convention established a global goal of stabilizing greenhouse emissions to avoid an increase of 2 ℃ in the planet’s temperature. To commemorate the anniversary, the COP 26, led by the United Kingdom, called for the Climate Ambition Summit to invite the countries of the convention to announce their new goals regarding emission reduction, an event where Mexico shone due to its absence. In contrast, some Latin American countries that presented new goals were Argentina, Colombia, Costa Rica, which also reaffirmed its previous commitments.

On December 14, the Inter-ministerial Climate Change Commission (CICC) gathered in order to approve the new Nationally Determined Contribution (NDC) and the Special Climate Change Program (PECC), the latter approved with a year’s delay. To the alarm of civil society organizations and to the disappointment of the international community, Mexico did NOT announce new or more ambitious goals, but rather «reaffirmed» the goals it established 5 years ago, that is, to reduce 22% of greenhouse gases emissions and 51% black carbon emissions.

This shows the lack of commitment Mexico has in the face of the current climate emergency given the country’s responsibility as one of the major emitters of greenhouse gases. It also represents an enormous setback regarding climate change since it violates the principle of progressivity stipulated in the Paris Agreement which was also recognized in our constitutional framework, and is the reason for which precisely the revision cycles of the NDCs, taking place every 5 years, were created in the first place.

To this context are added actions such as the extinction of the Fund for Climate Change, the reduction in the budget allocation for the Cross-Sectional Annex in matters of mitigation and adaptation to climate change -which by 2021 represents only 1.1% of the total budget of the country, of which 75.3% is allocated to natural gas transportation, which is tightly linked to climate change-; and the promotion of energy policy based on fossil sources to the detriment of energy transition, an end to which 11.6% of the resources of the federal expenditure budget for next year are directed.

In this scenario, Mexico ceases to be on the front line in the fight against climate change and becomes one of the countries with NO ambition, putting the fulfillment of its present and future population’s human rights at risk. In addition, Mexico has yet to present a proposal to comply with the lackluster commitments it currently has, and in turn it is putting all its effort and resources in actions and policies contrary to them.

We presented a petition, alongside the Center for Biological Diversity, under the new trade agreement between Mexico, the United States and Canada (USMCA), due to the inability of the Mexican government to protect the North Pacific loggerhead turtles, a species in danger of extinction and that has registered a high mortality in Baja California Sur.

The petition presented to the Commission for Environmental Cooperation (CEC), within the framework of the USMCA, indicates that loggerhead turtles, which are born in Japan and migrate to waters of the United States and Mexico, frequently drown in fishing nets off the Mexican coast. 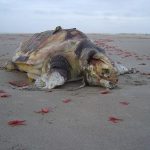 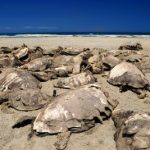 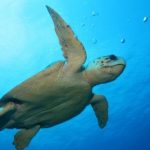 “If the Mexican government does not protect loggerhead turtles from the deadly nets, it could end their migration to our coasts, an event that has happened for millions of years,» said Alejandro Olivera, scientist and representative in Mexico of the Center for Biological Diversity. “If fishing gear continues to kill hundreds of these magnificent animals, the Mexican government faces a real threat of extinction. According to the USMCA Agreement article, Mexican officials have the legal obligation to stop this from happening.>>

According to official data from the Mexican government, between 2017 and 2019, 889 loggerhead turtles have been found dead on the west coast of Baja California Sur. Although we are still waiting for the government to deliver all the data to the organizations by 2020, it has been reported that only from January to June this year, another 351 dead turtles were found. Thousands of turtles are likely to have died in the last decade due to entanglement in gillnets and longlines.

«The Mexican authorities have not been able to protect and preserve the endangered loggerhead turtle,» commented Mario Sánchez, Director of CEMDA’s Northwest regional office. «We are now seeking to raise this problem under the new provisions of the USMCA, given that these sea turtles also inhabit American waters.”

Indigenous, rural, urban and coastal communities of the states of Campeche, Yucatán, and Quintana Roo, as well as society organizations, obtained the definitive suspension related to the legal action presented in July 2020 against the Mayan Train project.
As a result of the suspension, no new activities are allowed to be carried out in relation to the Mayan Train project in section 2, which runs from the municipalities of Escárcega to Calkiní, in the state of Campeche. With this resolution, the judicial authority allows the people who filed the legal action to be able to carry out a judicial process without works that could generate irreparable damage to their land, which constitutes a benefit for society in general. We hope that, given the arguments presented, the Mexican State can apply the precautionary principle, which is already in force in Mexico for all authorities, and decides to suspend the entire project.

The authorities responsible for the project that must abide by the suspension granted by the judicial authority are the National Fund for the Promotion of Tourism (Fonatur), the Ministry of the Environment and Natural Resources (Semarnat), the Presidency of the Republic, the National Institute of Indigenous Peoples (INPI), the Ministry of Communications and Transportation (SCT), as well as Fonatur Tren Maya (TM).

Regarding the recent Authorization of the Environmental Impact Assessment of Phase 1 of the Mayan Train, granted by Semarnat to Fonatur TM, neither works for said phase may be carried out, since new works are included in the second section of the Escarcega-Calkiní stretch which, as already mentioned, is suspended according to the decision of the Judicial Power.

We respectfully call on the Judicial Power to maintain and execute the definitive suspension, since only in this way is respect for our human rights guaranteed. Likewise, we respectfully request the judicial authorities to act with greater diligence in this case, as many procedural delays are occurring in the different defense processes that have been filed in the Yucatan Peninsula. There is a general delay of between 4 to 6 months in the admission of the claims, insufficient suspensions, contempt of the suspensions and lack of sanction to the responsible authorities.

In this sense, it is essential that the Judicial Power of the Federation establishes itself as a true protector of human rights and that guarantees access to justice and the generation of conditions that allow people, communities, and any citizen to challenge the violations that stem from this project.