On March 17 we presented a report which addressed the situation concerning environmental human rights’ activists. Mexico, 2019: this year registered the lowest numbers of attacks against environmental activists. However, homicide remained the principal way of attack as 15 people lost their lives.

We call upon the government to protect environmental activists as well as to guarantee their rights. The State must prioritize the defense of the environment, the soil and the territory in order to improve the community’s life conditions.

The data included in the report prove that in Mexico there is still structural violence targeted against environmental activists. Our country has been characterized by violence when it comes to the topic of human rights, and this situation has worsened since 2006 due to the war against drug trafficking in addition to the sustained and systematic pattern of serious violations enacted by the state. Moreover, in 2013 the reform to the energy sector was established, an action which worsened the situation even further. 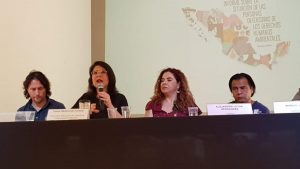 It is urgent to strengthen CONAFOR before next forest fire season

We called upon the President as well as to the Union Congress to hastily redirect additional resources in order to tackle next forest fire season; this season in particular may potentially have great economic, social and environmental repercussions as it may affect the air quality and biodiversity.

In this regards, CEMDA’s director, Gustavo Alanís, emphasized that Mexico is exposed to a great risk derived from the dismantling of the human, technical, financial and operational capabilities of the National Forestry Commission’s (CONAFOR), an institution which has had a budget reduction of around 43% since 2012. He also pointed out that the cancelation of the Temporary Employment Program (PET) is another important factor, as this program used to finance brigades for preventive work and fire care.

Mexico and Canada present a Memorandum of Understanding, as well as radio capsules on adaptation to climate change

This Memorandum of Understanding, presented between the Ministry of the Environment and Natural Resources and Parks Canada, reasserts both countries allegiance towards the preservation of National Parks and Protected Areas.

As an antecedent of this cooperation, and in the context of the Mexico-Canada Alliance, a radiophonic campaign on adaptation to climate change was created. The radio clips were designed between the Mexican Center for Environmental Law (CEMDA) and CONANP and financed by the Canadian Embassy in Mexico.

Here you can listen to the 4 radio clips which constitute our campaign and which focus on establishing Protected Natural Areas as extreme meteorological events’ buffers and as a source of wellbeing for the communities.