We’re halfway through the year and we are still working to defend the right to a healthy environment. Here we tell you about our most relevant activities throughout the month.

Civil society regrets the murder of Tomás Rojo and calls for immediate protection and effective security guarantees for the Yaqui people.

One of the saddest news we received this month was Tomás Rojo’s murder. He was part of the Yaqui community, as well as a tireless defender of life, water and his community’s territory. We also deeply regret the constant aggressions to which the Yaqui people are subjected.

Sonora’s authorities and the federal government have failed to guarantee the Yaqui community’s integrity over their territory, their human rights, and their defenders.

Moreover, said authorities have yet to ensure a safe space, where environmental defenders can do their work, just as it is stated in the 9th article of the Escazú Agreement.

Last year, 18 environmental defenders were killed in Mexico, according to the Report on the Situation of Environmental Human Rights Defenders, prepared by the Mexican Center for Environmental Law, A.C. (CEMDA).

This situation is replicated in several states of the country, where people who defend land, territory, and human rights are increasingly exposed and vulnerable to aggression of all kinds, which, in many unfortunate cases, go as far as murder, without the Mexican State fulfilling its obligations in this regard. Let us recall, for example, that at the end of last year Congress disappeared the trust fund that guaranteed the operation of the Mechanism for the Protection of Journalists and Defenders.

The representatives of the ejidos Don Samuel, Miguel Alemán, Haro, Escárcega, División del Norte and Candelaria in the state of Campeche, made an urgent call to the Federal government, led by the president of Mexico, Andrés Manuel López Obrador, to guarantee their safety and that of their families in the face of the attacks and human rights violations their communities have suffered.

Through a press release, they had previously denounced a series of fraud and extortion, as well as human rights violations by the company Barrientos y Asociados, S.A. de C.V, hired by the National Fund for Tourism Promotion (Fonatur) to carry out the negotiation for the release of the rights of way for the project called “Mayan Train”.

They also demanded the necessary information on the project in advance, and in a culturally appropriate format before being asked to approve or make decisions regarding this or any other issue that impacts their communities in the short, medium and long term.

To this date, insecurity has increased greatly in these communities, as several people have been threatened.

Mexico far exceeded the permissible limit for the mortality of loggerhead turtles (Caretta Caretta) in the Gulf of Ulloa (Baja California Sur), with about 888 dead specimens in 2020. The total number of dead turtles in this region in the last four years is 1,977, according to reports from the Federal Attorney for Environmental Protection (Profepa) and the National Commission for Protected Natural Areas (Conanp).

The North Pacific Regional and Marine Ecological Ordinance Program (POEM), decreed on August 9, 2018, establishes that “during the period of maximum aggregation (May-August), the total bycatch of yellow turtles in the area’s polygon of fishing refuge and measures to reduce the possible interaction of fishing with sea turtles in the Western Coast of Baja California Sur may not exceed ninety individuals”.

Given this, last December we presented a petition under the new rules of the T-MEC to the Commission for Environmental Cooperation (CCA), in which the breach of environmental legislation for the conservation of the species is pointed out. The Mexican government has already issued its response denying that the turtles die due to fishing. 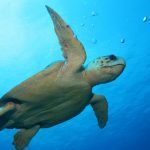 “When we believed that this was a resolved issue, the Mexican government once again denies that turtles die in fishing nets; denying, in fact, scientific evidence,” said Alejandro Olivera, representative in Mexico of the Center. «And even worse since the government left the loggerhead turtle conservation plan without a budget in 2016.»